A fever of eagle ray pups has arrived at SEA LIFE Kelly Tarlton’s Aquarium! The baby rays were born on New Year’s Eve and are being monitored closely by the aquarium’s aquarists.

The pups were born to two mothers who both reside in the Fish Tunnel display, which does not currently house a male eagle ray. The team says there are two ways the female eagle rays, named Nibble and Spot, could have conceived the pups;

“Whilst we were surprised to see Nibble and Spot give birth to pups because they haven’t been with a male in two years, it’s not completely unheard of. It could have occurred through a process called parthenogenesis, which is a rare reproductive strategy where an embryo develops without fertilisation. Alternatively, Nibble and Spot could have stored sperm inside their bodies for the last two years. Sperm storage has been recorded in several shark and ray species, so we think this is the more likely scenario,”

The other remarkable fact is that Nibble and Spot gave birth at the same time as each other on New Year’s Eve and it marked exactly one year since Nibble had last given birth! Nibble’s pups from New Year’s Eve 2019/20 are currently on display in Turtle Bay.

Eagle rays are a type of cartilaginous fish with skeletons made of cartilage instead of bone as well as wide, flat snouts like a duck’s bill. They are found in New Zealand waters and are easy to identify thanks to their pointed wings and the flapping motion they make when they swim.

The pups will remain behind the scenes for the foreseeable future where the team is feeding them a healthy diet of mussels and fish fillets. Despite being born with their barbs, the pups are vulnerable to larger fish while they are still so small, but they will go on display in Turtle Bay in the future. 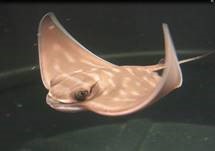 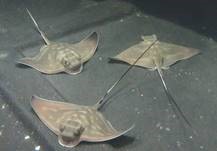 SEA LIFE Kelly Tarlton’s is also home to a colony of King and Gentoo penguins, rescued sea turtles, thousands of fish and many other fascinating sea creatures, which guests can all see on display.