Working with penguins - a dream job for animal lovers!
POSTED ON 01 January 0001 IN Behind the Scenes Share this page
fb
tw
in
Share

For any animal lover, becoming part of the animal care team looking after penguins must be one of the best jobs in the world!

We spoke to Tish Hannan, Displays Department Supervisor at SEA LIFE Sydney Aquarium to find out how she landed her dream job.

How did you end up working as a Displays Department Supervisor?

I have a bachelors degree in biology, specifically genetics and evolution. I spent a year in Paris as a tour guide after university and when I got back to New Zealand I luckily secured a penguin keeper role at Kelly Tarlton’s. I’ve always wanted to work with animals and have had lots of pets in my life (nearly 120 at one point!) so penguin keeper seemed like a good fit!

When SEA LIFE Sydney Aquarium announced they were starting a new penguin exhibit I knew I wanted to be involved. Since moving to Sydney I have had the opportunity to run not only the penguin teams but also the Dugong and parts of the Aquarist team as well, which has been a huge help to diversify my skill set

What does a typical day in your job look like?

The main role of an aquarium is to educate the public on the conservation needs of the animals we look after. It is my job as the Displays Department Supervisor to make sure that message is being delivered to the best of my ability through the care, innovation and development of the display areas.

On a typical day first thing in the morning we check all the penguins, this includes all the sub Antarctic King and Gentoo penguins in the Penguin Expedition exhibit and our adorable Little Penguin colony as well. We then clean both exhibits which takes around 3 hours with a team of 5 people and bringing in between 2 - 4 tonnes of fresh ice every day.

What's the biggest challenge in your role?

Something no one told me when I started this career path in aquariums was that you not only need to be a great animal keeper and educator, but you also need to be a plumber, a mechanic, a facilities manager, a people manager, an SOP writer, a health and safety officer, a problem solver above and below the water, a penguin mother on call at all times of the night for the little ones and time folder to fit that all in. I love it though and all the different aspects of the role. 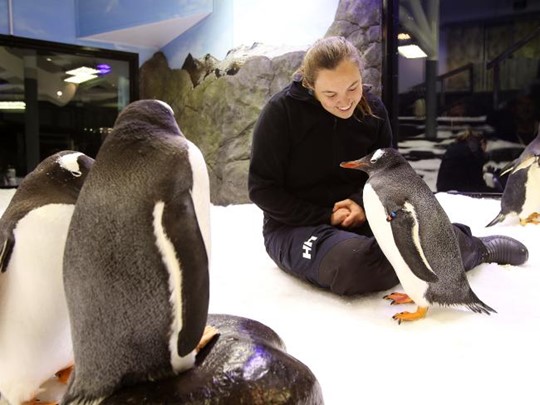 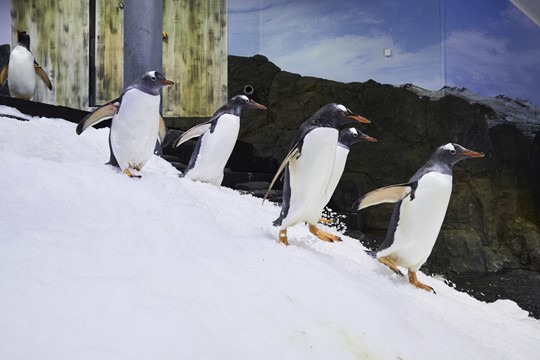 What is your most memorable experience working in your role?

My favourite part of my role is the volunteer work we get to do with NSW National Parks and Wildlife service. Recently we had a day where a group of us went to a site to redevelop the area for the Little Penguins of Manly to use! This is the colony of mainland Little Penguins left in NSW so it’s such important work and could really make a difference for them. It mostly involves a lot of weeding and planting and very little to actually do with penguins but it’s extremely satisfying to see the site before and afterwards!

What are penguins like to work with? and do you have a favourite penguin?

The Gentoos are by far the cheekiest and always need to be involved with whatever we are doing, whether that be cleaning the windows, shovelling the snow or dive cleaning the tank. The King penguins are far more regal and like to keep to themselves, until the moment you have food and then they are all over you with no regard for personal space. I really don’t like picking a favourite penguin cause they all have their own little quirks.

Lara our chick from last year is pretty up there with my favourite bunch though, she’s a very special bird and doesn’t quite know how to penguin yet so it’s very amusing to watch her fumble her way through the colony. I also had to hatch her out of the egg after she failed to do so herself so she’s kind of like my special baby.

The penguins constantly misbehave, they never do exactly what we ask them… Marmalade is always doing hilarious antics, it’s currently breeding season for our Gentoo penguins and she’s constantly flirting with everyone… my entire phone memory is effectively taken up with ridiculous penguin photos of some bird doing something it shouldn’t be.

What is the best part of working for Merlin?

I think the best thing about working for Merlin is it gives you so many opportunities to further your career in so many different countries. I’m one of those people that loves experiencing new places and it’s great to know that I can work for a company that has supported me moving to new Merlin locations.

Health, Safety and Zombies; finding that dream job at Merlin